Protecting Animals at Home and Abroad 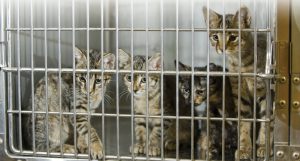 Each year, more dogs, cats and other pets end up in shelters as lost, stray or owner-surrendered than leave them for a new home. What can be done to reverse this trend?

Spread the word: Only about 30 percent of household pets come from shelters or rescues, according to the ASPCA. To help, suggest that shelters post photos in the lobby, supported by a note about each animal’s good points and special needs to entice potential adopters. Also share YouTube videos that celebrate adoption and advocate controlling the pet population (see Tinyurl.com/SpayNeuterStreetMusic1 andTinyurl.com/SpayNeuterStreetMusic2).

Volunteer: The Motley Zoo, in Redmond, Washington, provides medical care and behavioral training for ill, injured, neglected, abused and unwanted animals mainly from overflowing shelters. About half of its 150 volunteers foster pets; others plan educational events or handle administrative tasks. “Each person has a specialty,” says Jamie Thomas, executive director. “We match fosters and animals to get the best results.”

No kill shelters are becoming more common, even though they require uncommon commitment. As part of implementing effective procedures and infrastructure, shelter leadership works to secure the support and involvement of the community. By joining together to implement lifesaving programs and treat each life as precious, a shelter can transform a community. Find a no kill shelter primer at Tinyurl.com/NoKillReform.

Illegal wildlife trading and loss of habitat are huge and escalating problems wild animals face every day. Small repopulation success stories exist, but progress is slow. Here are some of the most urgent and dramatic perils topping the lengthy endangered species list.

Elephants are hunted for their ivory tusks. “China is the largest consumer of ivory, but the United States is second,” says Jeff Flocken, J.D., North American regional director with the International Fund for Animal Welfare (IFAW), headquartered in Yarmouth Port, Massachusetts (ifaw.org). “Every year, 35,000 elephants are killed; an average of one every 15 minutes.”

Northern white rhinos once freely roamed East and Central Africa south of the Sahara. Until 1960, there were more than 2,000; today, only five exist—one in the San Diego Zoo’s Safari Park, one in a Czech Republic zoo and three at a wildlife conservancy in Kenya.

Imported as pets or show attractions, “There are between 10,000 and 20,000 big cats in private hands in America at facilities/businesses not accredited by the Association of Zoos and Aquariums,” says Carson Barylak, with IFAW’s Washington, D.C., office. “There are more tigers in private possession in the U.S. than in the wild.”

Pangolins eat ants and termites. Hunted for meat and their scales (used in Asian medicines), they are one of the world’s most endangered mammals (see Tinyurl.com/SavePangolins).

Thirty years ago, the world population of lowland gorillas numbered 240. Thanks to the Mountain Gorilla Veterinary Project, in Rwanda, Uganda, and the Democratic Republic of the Congo, the population has grown to an estimated 880 (GorillaDoctors.org is supported by SaveAGorilla.org). Led by Ruth Keesling, the project has shown the inestimable value of the species. “Once you’ve looked into the eyes of a gorilla, you’re forever changed,” says her son Frank, in Denver, Colorado.

“IFAW is working to advance legislation to prohibit private ownership of big cats in the U.S. The bill received bipartisan support and we hope to see it become law,” says Barylak. “We’ve asked the U.S. Department of Agriculture to ban direct contact with big cats. It’s harmful to the animals and the people that handle them.”

Annual running events with participants donning gorilla costumes raise funds and awareness. Following the Austin, Texas, event in January, runs will be held in Cincinnati, Ohio, on March 29 and in Denver, Colorado, on November 1. “Another way to help gorillas is to recycle cell phone and computer batteries. Coltan [tantalite]is used to make batteries—13 percent of the world’s supply of coltan is in the park area of the Congo,” says Frank Keesling.

Barriers to improving the lives of animals can be overcome and banished when we believe it’s possible and everyone helps. The animals are counting on us.
Connect with freelance writer Sandra Murphy at StLouisFreelanceWriter@mindspring.com.