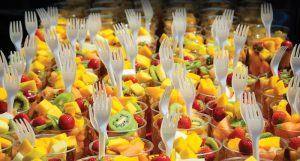 Katie Newell, a blogging Kansas City mother of two who fights inflammation from several autoimmune diseases, is rigorous about the fresh, unprocessed food she buys. After noticing adverse symptoms from dining at a restaurant, Newell initially thought that eating out was no longer an option for her.

Today, she happily ventures out for the occasional restaurant meal, knowing that the healthy food landscape is changing. “I look to restaurants owned by local chefs that use local and sustainable ingredients and prepare everything from scratch,” she says.

From higher-end dining to fast-food joints, food trucks and vending machines, we now have even more choices for fresh, seasonal, organic, local, sustainable, tasty nutrition when we’re on the go. It’s because entrepreneurial chefs and fitness buffs are responding to customer demand for healthy eating options away from home.

London’s celebrated Chef Yotam Ottolenghi, founder of several restaurants and takeout emporia and author of bestselling cookbooks Plenty and Jerusalem, says that “healthy” can happen simply by putting the spotlight on plants. Ottolenghi’s cuisine is known for celebrating vegetables, fruits and herbs. He says, “That attitude, I think, is a very healthy attitude to eating.”

At Gracias Madre, a plant-based vegan Mexican restaurant in Los Angeles and San Francisco, high style doesn’t mean chandeliers and rich cream sauces. The brainchild of Executive Chef Chandra Gilbert, also director of operations for the Bay Area’s vegan Café Gratitude, it serves organic, local and sustainable fruits and vegetables and bold flavor without excessive calories. She says, “I’m inspired by what I want to eat that tastes good and makes me feel good, and I want to affect this planet—to create health and vibrancy all the way around.”

Even at fast-food restaurants, healthy choices are increasingly available. “Unforked, Panera Bread and Chipotle do a great job being transparent about what’s in their food,” says Newell. Before venturing out, she often checks the company’s website for specific nutrition information.

Most hospitals, universities, schools and corporations appear to espouse healthy eating—until the offerings in their vending machines reveal the opposite. Ethan Boyd, a student at Michigan State University, noted this disconnect. “While dining halls strive to serve healthy options,” he says, “there are 40 vending machines on MSU’s campus that spit out junk food.”

Sean Kelly, CEO of HUMAN Healthy Vending (Helping Unite Mankind and Nutrition), had a similar, “Oh, no,” moment at his New York City gym when he was a university student. Today, Kelly’s franchise model allows local operators to supply individual machines with better options from organic fresh fruit to hot soup. “Our vision is to make healthy food more convenient than junk food,” he says.

Entrepreneurs Ryan Wing and Aaron Prater, who also have culinary training, recently opened Sundry Market & Kitchen, in Kansas City, Missouri. In their update on a neighborhood market, they sell takeout foods like red lentil falafel and citrus beet soup. “I think people want to eat local food and better food, but they want it to be convenient,” observes Wing. “The bottom line is we want to make it simple to eat good food.”
Judith Fertig blogs at AlfrescoFoodAndLifestyle.blogspot.com from Overland Park, KS.