In October of 2017, I was honored to officiate the wedding of our good friends Helga Muller Napolitano and Bill 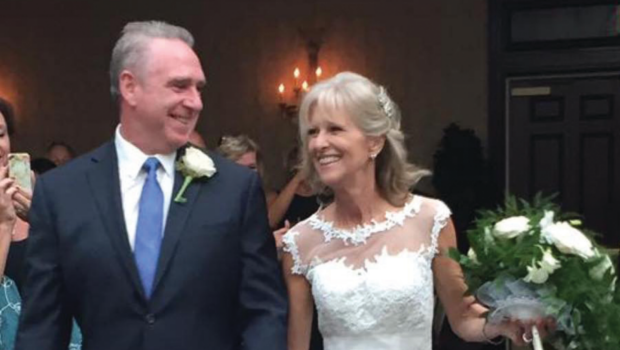 Napolitano. Family and guests cheered as the beautiful and glowing couple entered the ballroom and had their first dance. They were and are two people that anyone can see are very much in love. Today Helga can no longer walk and has very limited use of her arms and hands. She has not tasted or eaten food in more than a year. Imagine that for just a second.

The summer before their wedding, Helga was diagnosed with the most aggressive form of amyotrophic lateral sclerosis (ALS), Bulbar. Helga and Bill knew the diagnosis and path they were on when they took their vows. Like others suffering from this disease, they endure and fight in private day after day from their home in Huntington, New York. ALS ultimately renders its victim almost entirely dependent on others to do the basic things we take for granted. In less than two years, ALS has robbed Helga of her speech, career, her ability to eat or drink, all mobility and independence. She has difficulty breathing and horrible, terrifying choking attacks. She is fed through a tube into her stomach.

What ALS hasn’t stolen is Helga’s spirit, her faith, her humor and her love for Bill, sons Jon and Timmy, and her friends. There isn’t a person that visits Helga that is not greeted with a smile or a joke. On a recent visit, my wife was helping her inject her “formula” and Helga said (through her iPad app): “Pass the potatoes please.” Another time, she jokingly asked her to slip a little wine into her tube. Helga can barely move a muscle, but she is the strongest person I know, along with Bill. They would be the last people to bring attention to themselves but allowed me to write this to raise awareness of this disease.

Did you know that May was ALS Awareness Month? I’m betting not. I honestly didn’t know myself until the son of our close friend suffering from this disease posted it on his Facebook page. As devastating as ALS (aka Lou Gehrig’s disease) is, it rarely breaks through the media noise; the one notable exception being the Ice Bucket Challenge a few years ago.

The horror of what ALS does to people and their families remains unknown to most unless you know someone suffering with it. It is a neurodegenerative disease that ruthlessly and relentlessly attacks its victims’ nerve cells in the brain and spinal cord, ultimately leaving their body ravaged and useless but the mind totally intact. In a word, ALS is cruel.

Media coverage of ALS Awareness Month was nearly invisible, while significant broadcast media attention was spent on stories about Skin Cancer Awareness Month and, of course, the naming of the new royal baby. I was speaking to my daughter about the lack of media coverage about ALS and she said, “You need a famous celebrity to have the disease for the media to pay attention.” Sad but true.

I get it—sort of. It’s easier to have a celebrity or telegenic host on to talk about skin cancer prevention and the importance of using sunscreen and wearing hats in the sun to avoid it. Compare that to having an ALS patient sitting in a wheelchair sharing the unpleasant specifics of their daily lives and how this disease attacks their dignity and taxes their family emotionally and financially. It’s not a pretty picture and thus far has never had a happy ending. It’s human nature to NOT want to discuss or deal with fatal realities like this until we have to. I have two friends that have to.

Patients afflicted with other diseases—no matter how horrible—are usually offered at least some glimmer of hope that treatment will make them well and keep them alive. Not so with ALS. There has been very little progress in finding a cause or cure. Most patients still die within two to five years of diagnosis; a life span that has not changed since Yankee great Lou Gehrig died of the disease in 1941.

In May of 2017, the U.S. Food and Drug Administration (FDA) approved a new drug called Radicava that, according to the ALS Association, in trials has slowed the progression of the disease in some patients by one third. Radicava is only the second approved ALS medicine by the FDA since 1995. According to the ALS Association, there are 5,000 new cases of the disease diagnosed each year (that’s 15 new cases per day). That may seem like a small number compared to the size of our population—unless you know someone that has it.

I want more people to know about Helga, Bill and others dealing with this disease. I want a miracle for Helga and Bill. Absent that, it would be nice if news media devoted just 1/1,000th of the time they spend on royal baby names to cover ALS so more people could see and understand it.

Currently, Congress is considering The ALS Disability Insurance Access Act (S.578), which will eliminate the current needless and arbitrary five-month waiting period for patients to receive social security and Medicare benefits; that’s five months that most ALS patients cannot afford. Find your representative and give them a call, drop an email or sign up for a local ALS Association Chapter Walk. That would be a great start.

Since the original writing of this story, Helga Muller Napolitano sadly passed away (Friday, June 14). It was nearly two years exactly from the time of her original diagnosis. She leaves behind a loving husband and family and too many friends to count. She also leaves a legacy of grace, love, strength and unbending faith in the face of terrible adversity. Helga was 57.

In honor of Helga, her family continues to fight to raise awareness and funding for ALS patients and their families. If you are interested in learning more, visit Team Popko Power at Web.alsa.org/goto/helganapolitano.

Dan Martinsen is a former senior communications media executive and is now a freelance writer living in New York City.