“My doctor said my blood work is fine,” or “I think they checked my thyroid and said it was okay,” said many a new patient. Nine times out of 10, the same thing will be discovered: Not only was the blood work not quite fine, but not enough tests were actually performed to make such a claim.

What is usually tested is a complete blood count (CBC), a complete metabolic profile (CMP) and a basic lipid 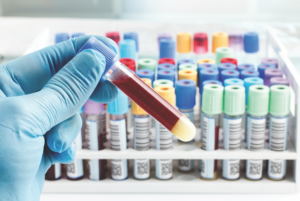 panel. Sometimes, there will be a vitamin D test, a urinalysis, a vitamin B12 test and a folic acid test. Occasionally, there will be a thyroid test, generally consisting of a TSH (thyroid-stimulating hormone) test. If you are lucky, either T4 or T3 uptake is tested as well, but generally not.

Let’s review these tests. The CBC checks our blood for the types of red and white blood cells, their size and shape, hemoglobin, and other detailed data on their appearance and function. These tests are for a reason, and their reference ranges are as well. What is beyond shocking to me is how often some of the “M tests” are out of range, and no one says anything about it. The M tests check the size, shape, volume, color and other physical values of our red blood cells. These give enormous insight into the health of our blood production systems and gives an idea if there are any anemias (iron-deficiency anemia is just one type) or other blood-related problems in the body. Some of these tests are called MCV, MCHC and MPV. If these values are out of range, it suggests things like young, immature blood or irregularly shaped blood. Sound important? Besides just an anemia, they can suggest issues of the spleen, liver and kidney far more often than the bone marrow, as you might think.

The CMP tests some of the chemicals and a few minerals/electrolytes in the blood. Again, here there are some things ignored quite often. Take glucose for example. There is the standard range of up to 99 or 100 being considered okay, but have you ever wondered what values extremely healthy individuals have? Most of my patients that have worked with me for at least a few months find their glucose values to hover around 80 to 90, not 95 to 105, as many seem to have. Another test is calcium. This one is fascinating to me. For all the comments about healthy bones and calcium supplementation, it is extremely uncommon to see calcium levels out of range! So, why are our bones in general weakening? Honestly, this is a whole article unto itself, but for whatever reason—and there are many—the body is consuming or destroying the bones as a result of other imbalances, such as chronic systemic inflammation; long-term digestive problems, especially with the use of acid blockers and reducers; or hormone imbalances. Almost never is it calcium deficiency, as virtually all research shows. Vitamin D, which is sometimes tested, has been said to be deficient in more than 90 percent of the U.S. population, despite those that work outdoors and sunbathe regularly. That is also beyond the scope of this article.

Some of the other minerals tested are also often out of range. Sodium, potassium, carbon dioxide and chloride are all very important electrolyte minerals in the body. They have a very specific and defined range that they are required to be in. While low potassium may be dealt with by consuming bananas regularly, why is that for most of our life that was not necessary? It’s because we are missing the big picture. These imbalances are really showing us that our bodies, or more specifically, some of our organs, are not functioning quite the same as when we were younger. Maybe they need a little help and repair? These electrolytes are mostly managed by our kidneys, adrenal glands, liver, and even our lungs. How often have those been discussed when observing a mineral or chemical imbalance on your blood work? Perhaps if the CMP values for ALT, AST or alkaline phosphatase were out of range, you heard your liver referenced. If you have seen high liver enzymes, as those three are sometimes referred to, what was the action step? An ultrasound? Maybe they found nothing. Then what? Maybe they found fatty streaks on the liver or gallstones? Now what? Did those values drop? Was there treatment? There are ways to get those values down to repair the source of the problem. It is not removing your gallbladder, sorry.

Lipid panels are interesting as well. Cholesterol, cholesterol, cholesterol—it seems to be all that matters. Actually, it probably matters less than you think. The ranges for cholesterol seem to have moved down over the past 40 years, despite heart attack rates rising over that same time. Yes, death rates have plummeted thanks to the miracle of modern CPR (cardiopulmonary resuscitation) and surgical life-saving techniques by more than 75 percent, but the incidence did not drop; it has actually increased over that time. Then there are triglycerides. Not the same as cholesterol at all. Triglycerides are really just fat. Cholesterol is actually a steroid—very different. High triglycerides are a sign that fat is not being processed appropriately, usually a digestive or liver issue. Those same reasons can cause high cholesterol as well, but not always. Isn’t it funny how they give prescription fish oil for high triglycerides now? Fat lowers fat?

My favorite part about cholesterol is the nonsense of good and bad cholesterol. As far as I can tell, there is only one structure for cholesterol. High- and low-density lipoproteins (HDL and LDL) are containers and markers that actually carry cholesterol and other lipids. It is actually a bus made of protein that carries passengers made out of mostly cholesterol. All cholesterol is the same. It is the type and destination of the buses that are different. Some of those buses are for great things, like hormone production and healing, while other buses are for damage and constant repair or inflammation. The problem isn’t the cholesterol, it’s the body’s need for cholesterol. If every day your body is inflamed, it will constantly fill buses with cholesterol with a destination of your arteries and to repair tissues. If every day your body is humming along well, those cholesterol passengers will get on the hormone and growth bus. Maybe the problem isn’t just too much cholesterol but rather the inflammation and damage requiring large amounts of cholesterol for repair.

This is a start of our basic blood work. Next month, let’s discuss some of the more advanced tests that a conventional blood laboratory has available to really unlock the reasons our bodies work and sometimes don’t work the way we want.