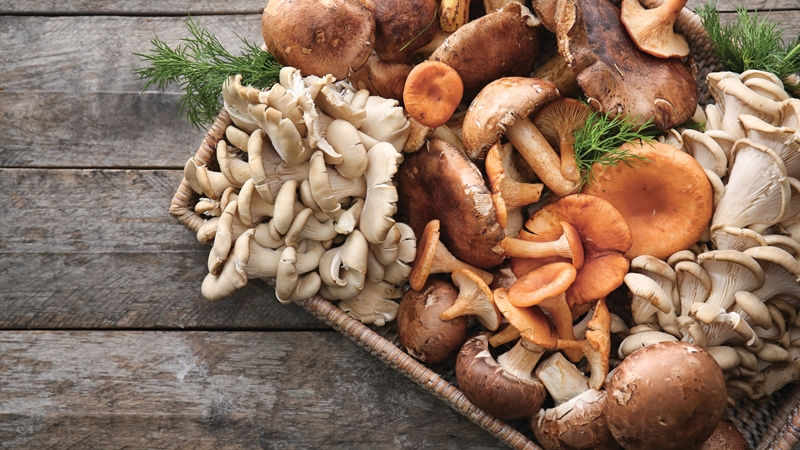 Beyond Buttons and Portabellas

Ahandful of mushrooms a day just might keep the doctor at bay, according to a mounting body of research providing powerful evidence of the fungal kingdom’s abilities to promote health and fight disease.

When Robert Beelman started doing nutritional research on mushrooms 20 years ago, they were touted for what they didn’t have: fat, calories, sugar, gluten and cholesterol. “Today, we can talk about all the good things they contain: fiber, protein, vitamins, minerals, antioxidants and other important micronutrients,” says the director of the Center for Plant and Mushroom Foods for Health at Penn State University.

Beelman’s research has focused on several micronutrients that are bountiful in mushrooms, including the amino acid ergothioneine, an antioxidant not found in significant amounts in any other plant-based food source. Ergothioneine levels decrease with age, and larger drops are associated with cognitive impairment, he says.

Lion’s mane is one variety known to protect cognitive health; it stimulates nerve growth factor, a protein that promotes healthy brain cells. “Lion’s mane is a cognitive enhancer, and it helps creativity, motivation and memory, as well as brain function,” Romine says.

Cordyceps and reishi mushrooms are also adaptogens—botanicals used for centuries in Asian medicine to help the body adapt to stresses, regulate bodily functions and support the immune and adrenal systems, according to Romine.

Turkey tail is one such medicinal mushroom, a longtime treatment for cancer and other diseases in Asia. The tree-based fungus contains polysaccharide-K (PSK), that is believed to inhibit cancer cell growth and repair immune cell damage after chemotherapy. “Medicinal mushrooms have been approved adjuncts to standard cancer treatments in Japan and China for more than 30 years and have an extensive clinical history of safe use”, either alone or combined with radiation or chemotherapy, according to a literature review published by the National Institutes of Health National Cancer Institute.

Mushrooms are pretty spectacular. All edible species benefit the immune system and together, support just about every system in the human body.
~Stepfanie Romine

Oyster mushrooms, another fungal superstar, contain cholesterol-lowering lovastatin, plentiful B vitamins and up to 30 percent protein, according to Paul Stamets, one of the world’s leading mushroom authorities. Oysters are also the most easily digestible mushroom, according to mycologist and herbalist Christopher Hobbs, author of Medicinal Mushrooms: An Exploration of Tradition, Healing & Culture. Hobbs’ 2017 article in HerbalGram, the peer-reviewed journal of the American Botanical Council, cites 122 different studies supporting the safety and efficacy of medicinal mushrooms such as oysters.

More Than a Pizza Topping

There are myriad creative ways to incorporate mushrooms into a diet, says Romine, who recommends aiming for a half-cup daily cooked serving. “Mushrooms are nature’s sponges, and will take on the flavor of any sauce, so start simply and add sauces sparingly.”

She suggests sautéing mushrooms with a neutral oil, then adding wine or sherry and finishing with fresh herbs. Cooking with wine can help unlock the beneficial compounds the fungi contain, says Romine. Fresh or dried culinary mushrooms like oysters, shiitakes or maitakes can also be great additions to morning meals like savory oatmeal or tofu scrambles.

Powdered mushroom extracts, available online or in health stores, are an easy way to infuse meals with fungi’s beneficial properties. They mix well into everything from raw desserts and baked goods to teas and smoothies.

Whole mushrooms that are tough, like reishi and chaga, can be boiled to extract the healthful elements and consumed as a tea or used for soup broth. Romine says raw mushrooms are not as flavorful, digestible or nutritional as cooked.

While a mushroom-rich diet can help protect and promote health, Romine cautions that they are not a cure-all or a substitute for a healthy lifestyle. To address specific health concerns, she recommends working with a dietician or clinical herbalist to develop appropriate and effective ways to incorporate mushrooms into a health regimen.

April Thompson is a freelance writer in Washington, D.C.

When marinated in classic Old Bay Seasoning and sliced into hearty rounds, king oyster mushrooms are a pretty convincing stand-in for scallops—especially once they’ve been seared and braised. Corn furnishes a bit more heft, while artichokes lend their lightness and detoxifying properties.

Mix all marinade ingredients together in a container with a tight-fitting lid. Add the mushrooms, toss to combine and marinate for at least two hours. Remove the mushrooms and reserve the remaining marinade.

Place a large skillet over medium-high heat. Add the oil, then sear the mushrooms on both sides, about two minutes per side, then add the remaining marinade, garlic, artichoke hearts and corn (if using it). Deglaze the pan with the wine, scraping the bottom to loosen any brown bits.

Reduce the heat to medium-low. Cover and cook for 10 minutes, until the sauce has thickened and the artichokes and corn are heated throughout.

Many beneficial mushrooms are available in the wild, and some exclusively so. Foraging for them can be rewarding, but proceed with caution; some edible mushrooms may have deadly lookalikes, so only forage with the help of a trained expert.

Health food stores and online vendors are good sources of mushroom powders or extracts, which have a long shelf life. Look for a manufacturer of 100 percent organic mushroom extracts and supplements. Many farmers’ markets also carry specialty mushrooms like king oysters, lion’s mane or others not easily found in grocery stores.

Not all mushrooms are created equal. Button mushrooms and others in the Agaricus family are lowest in micronutrients like ergothioneine, with porcinis in the Boletus family yielding the highest, according to Robert Beelman, director of the Center for Plant and Mushroom Foods for Health at Penn State University.

Don’t expect magic from mushrooms, cautions author Stepfanie Romine; like most lifestyle changes or holistic treatments, it can take some months to yield results.