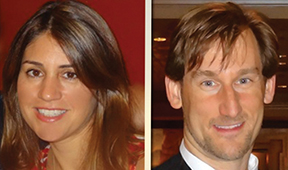 “Reconnective Healing is a new form of healing that researchers say may be accessible on the planet for the very first time,” says practitioner Robert Koenig, co-owner of Reconnect Long Island, in Westhampton. Unlike ancient energy healing, such as Reiki, which draws upon energy that has been available to humans for millennia, Reconnective Healing is said to work with a new and broader bandwidth of frequencies that allow for profound transformations to take place. Koenig expresses that it helps practitioners and recipients alike connect not only with energy, but with vibrations of light and information as well. When these comprehensive vibrations of light and information are received—via a relaxing, handsoff experience—it can restore harmony at a physical, mental and emotional level. At the essence of Reconnective Healing is this restoration of balance that brings ease to the physical and energetic body. This often life-changing experience can help one realize one’s wholeness of being and reconnect to universal frequencies.

When the numerous healings taking place by founder Dr. Eric Pearl came to light, scientists became curious to understand how it is possible. Twelve international studies were developed that stunned researchers because they were finding clear, measurable results. One study, by Dr. Gary Schwartz, of the University of Arizona, focused on biophoton emissions, which are light emissions within each of one’s cells. It was found that these light vibrations became far stronger with Reconnective Healing, giving applicability to the terms “light worker” and “light being,” and indicating greater health.

Further, Dr. William Tiller, of Stanford University, developed instrumentation that can measure thermodynamic free energy in the atmosphere. He used these instruments initially to test energy vortexes around the globe, such as in Sedona, Arizona, but when he caught wind of Pearl’s work he decided to test the levels at one of his seminars. He found that the levels spiked so significantly that they far surpassed those found in the vortexes, and described that to artificially recreate those readings he would have to raise the temperature in the room to 300 degrees centigrade. It was these studies that assured the scientific-minded Koenig to give the seminars a try, which he now understands to be a gift to the planet.

One of the great things about Reconnective Healing is that it is really for anyone, from the spiritual to the layman to the unbeliever. I was lucky enough to experience a Reconnective Healing session from Koenig, and although I didn’t know what to expect, the vibrations are still resonating with me a month later. Upon taking off my shoes, laying down, and closing my eyes, I began to feel twitches in my torso and feet, as if stagnant energy was being released. This gave way to what looked like an s-shaped riverbed of light coursing its way from my forehead to toes. I felt as if every molecule of my body was releasing a subtle glow, and a sensation of weightlessness engulfed me to the point where my hands kept lifting uncontrollably. I entered a state of deep peace, like I was retreating to the nurturing universe in order to be reborn. I was left with a beautiful cooling, minty sensation throughout my whole body that stayed with me for hours thereafter.

I agree with Koenig in that Reconnective Healing will find you at the right time, as it has been a truly transformative experience that continues to inform and inspire me to heal myself and help others.

Rob and Anessa Koenig, of Reconnect Long Island, offer Reconnective Healing out of their office in Westhampton. For more information, call 631-3389400, email RLI.Heal@gmail.com or visit TheReconnection.com.